Chicago-based rapper, Saba, has written an essay, entitled “Art, Ownership, and Business,” about his journey rising to prominence as an independent artist in the Hip-Hop industry.

As Saba explains in the essay, he first got into Hip-Hop after he graduated high school at the age of 16. That summer, he began making music in a makeshift studio he had built in his grandmother’s basement with fellow aspiring rappers from the Chicago area, who would go on to become the Pivot Gang collective. 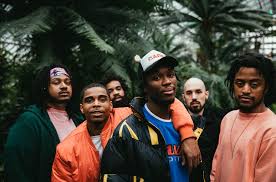 Now almost a decade into his career, Saba is one of the hottest rappers in the game, most recently making waves for the track “Plead the .45th,” featuring his longtime collaborator, Smino, which appeared on the soundtrack to the new film, Judas and the Black Messiah.

In his new essay, Saba writes in depth about his experiences as an independent artist, in an effort to “start an honest conversation around artist development and ownership.” He goes on to cover a number of topics, including the hardships of touring, finding a manager as an up-and-coming artist, and the importance of working hard in order to make it in the industry.

Whether you are an aspiring rapper, an independent artist, or just a fan, looking to learn more about the hip-hop industry and how it operates, Saba’s essay is a must-read.