After staying relatively quiet, having released just a handful of singles since his debut album, 2019’s The Lost Boy, Cordae is back with a surprise EP entitled Just Until…. The four track EP serves as a tide over for fans, with the rapper promising that the arrival of a new album is imminent.

Having first gained notoriety as a member of the YBN collective (a group which he has since left), Cordae proved himself to be one of the most exciting young rappers in the game with his debut album. Featuring artists such as Anderson Paak., Pusha T, and Meek Mill, The Lost Boy was a huge success, both critically and commercially, having sold half a million copies while also garnering two Grammy nominations.

Since then fans have been eager to hear from Cordae, wondering where he will take his sound next. On the new EP, the North Carolina rapper seems to be aware of this and doesn’t give his fans any real hints as to what kind of sounds they should expect on the new album. With all four tracks on Just Until… being wildly different in almost every possible way, the only thing that fans can be sure to anticipate is quality across the board.

Just Until… will undoubtedly sneak under many peoples’ radars as one of the best Hip-Hop projects of the year so far. Clocking at just four tracks, all of which are about three minutes in length, the project is very short, even for an EP. But make no mistake. There is a lot to unpack here.

The EP opens with the track “More Life,” on which Cordae raps about just that: his life. Featuring production and a hook from the legendary Q-Tip, the track also serves as a showcase for Cordae’s genuine talent as an MC. Incorporating complex rhyme schemes and memorable bars like “Carrying loads, at the same time, burying foes/Peep my catalog, you’ll marvel at my various flows/My girl a tennis star, you niggas out here marrying hoes,” Cordae is showing that he isn’t playing around on this, the EP’s opening track.

Cordae follows up the Q-Tip collaboration with another extremely well-produced track entitled “Dream in Color.” The track, which also boasts production from legends such as Raphael Saadiq and Terrace Martin, sounds nothing like its predecessor and gives Cordae a smooth backdrop upon which to show off his versatility. Featuring layered vocals with a neo-soul tinge, “Dream in Color” would not sound out of place on a Noname album, yet another testament to the young rapper’s versatility behind the mic.

The EP’s third track, the Young Thug-featuring “Wassup” is the biggest change-up on the whole project. The track features a fired up Cordae going back and forth with the Atlanta native over a catchy trap beat. While Thugger undoubtedly sounds more at home on the track, Cordae holds his own, once again proving that he can rap in a mirage of different styles and pull it off with authority. 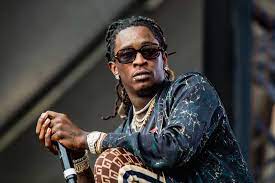 “Thornton Street,” the project’s fourth and final track is easily its best. After successfully proving his versatility over the course of the EP’s first three tracks, Cordae decides to show off his storytelling ability to close out the project. Effortlessly flowing over a dope instrumental that is reminiscent of that old, chop up the soul Kanye, the young rapper tells the story of his life, giving listeners a glimpse into his past and the events that made him the artist he is today. Touching on his relationships with his parents, Cordae loads the track with memorable bars including a dope reference to the highly influential artist, Jean-Michel Basquiat:

“My whole life is a canvas, I’m supposed to paint it

My future is a sure thing like the don Miguel

This ain’t background music, boy, these rhymes are felt”

On Just Until… Cordae proves that he is one of the most exciting and versatile rappers in the game right now. It is no fluke that the project garnered him co-signs from legends who come from all different styles and genres of Hip-Hop and if Just Until… is any indication, Cordae’s next album will not be one to miss.

Listen to the new EP in its entirety here.